According to Oscar Wilde, “Memory is the diary that we all carry with us.” Though, in this fast-moving age, it’s immensely difficult to keep this diary intact. Since, today, we’re surrounded with too much information. It’s like the world is bombarding us with floods of information each second. And, it’s not possible at all to keep our memory fresh and healthy. Therefore, these days, we often see that people are concerned regarding their memory loss; they try different methods to improve their memory, and keep it healthy like a scientist…

Our brain filters information – constantly. It just remembers those things which appear important, or have some significant value. It’s a total natural act. And, of course, you can blame it, in case you’ve a poor memory. But, this is rather common; it usually happens with those who work in a tense environment, or deal with too many things at once.

If you’re also involved in too many things, or if your job demands immense concentration, over and over, don’t be afraid if you forget things over and over… It’s normal… 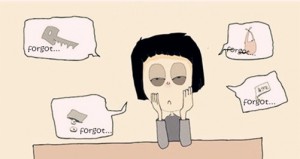 Before delving deeper into this subject and discovering its cure, first, it’s pertinent to comprehend some of its causes. The most common ones are lack-of-sleep, alcohol, stress, anxiety, depression, medications, and etc. Other than that, some severe cases can cause bad memory too, such as, nutritional deficiency, head injury, stroke, and etc.

Apart from this, professional researchers have found some uncommon factors as well that act as memory killers in the long run – obesity, smoking, diabetes, physical inactivity, and high blood pressure. On the whole, anything can crumble you with an iron fist. That’s why, rather than getting worried regarding memory issue, focus more on its cure. Perform those things which can improve your memory and make you appear intelligent like a scientist.

Initially, banish the common causes of your life – anxiety, depression, lack-of-sleep, alcohol, and etc. After that, have those foods which contain brain-boosting antioxidants, such as, blue berries, spinach, kale, and leafy green vegetables. Second, try meditation; it’s not only soothing for your body, but also elevate the status of your brain, and impel it to work in first-rate condition. Time and time again, the experts have confirmed that meditation improves our concentration and focus, and allow the information to flow smoothly in your brain, which is immensely beneficial for our memory.

Next, break the standard patterns of your brain. Sometimes, the similar patterns, and routines, intoxicate the brain and impel it to forget those things, which aren’t the part of active life. When you take the different approach, try new things, use different route, or try new dresses, or words, you exercise the muscles of your brain, and force it to strengthen the short-term memory – especially – so that it can commute with the different daily tasks.

Furthermore, there are some small activities that can polish your memory even more. For example, visit some new place – each month, watch documentaries, read books, have fun with puzzles and etc. Besides, increase the social power, meet new people, and make some interesting friends. The more you elevate the standards of your life, and break the standard patterns of it, the more your brain learns to consume information in a better way.

If you want some quick and tangible results, you can listen to our brainwave entrainment audio now. Though, usually, people rely on drugs for improving their memory, but this is something entirely different; it’s natural, and it doesn’t act as a burden. The Binaural Beats and Isochronic Tones of our memory recordings improve all memory aspects – long-term and short-term, and facilitate you in recalling different things. Just a few minutes a day would revive your brain like a magic.